Hi
I wanted to try out openvpn-as and I pulled the latest image from LinuxServer’s docker repo.

When I went in for logs, I get the following error because of which server couldn’t start.

First of all, posted in the wrong section, will move this.

I believe this isn’t working for you as you’re trying to run the container as root (uid/gid=0) - Please set this as a normal user.

Is your interface actually eth0 or not? Check with ip a it’ll list your IP’s and the interfaces they are bound to.

Hi
I used the sudoer user account, which is the only other account on my machine other than root with
uid : 1000
gid : 1000
as displayed by ‘id’ command.

Still, web interface shows connection timed out on the ip.
on 943 port, nothing shows up.

How did you install docker on your system?

Hello
I think you missed my earlier comment. So I am mentioning it again.

No I didn’t miss your message.

Have you got a firewall enabled on your box?

Also, not sure if it makes any difference but I always do my installs from http://get.docker.com.

Hello
I disabled the firewall and tried again. Now, iptables isn’t working as well inside.

I see this code, and found that it’s calling systemctl. I tried to call it but it threw me the following error
Failed to connect to bus: No such file or directory

Also, going to the except, there’s no openvpnas file in /etc/init.d

Just noticed you are missing --privileged from the docker create command.

Just tried the container myself and it’s worked first time: 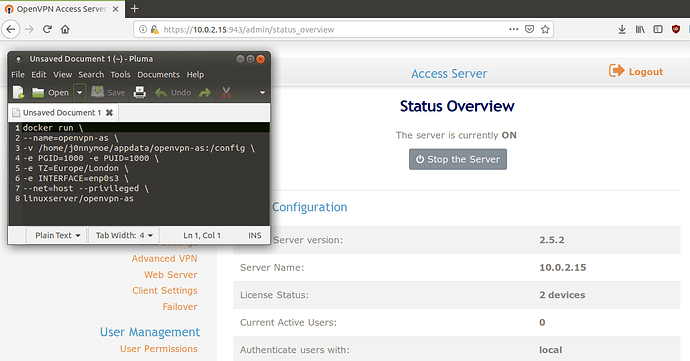 Hi
It worked for me as well. Thank you so much.
I think the issue was with the docker. I installed it from docker.com’s repository now.

thank you so much for help