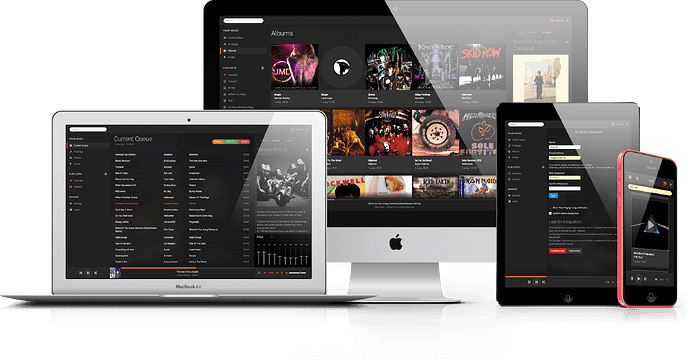 🐦 A personal music streaming server that works. Contribute to koel/koel development by creating an account on GitHub.

Koel (also stylized as koel , with a lowercase k) is a simple web-based personal audio streaming service written in Vue on the client side and Laravel on the server side. Targeting web developers, Koel embraces some of the more modern web technologies – CSS grid, audio, and drag-and-drop API to name a few – to do its job.

There are 2 images that the docs recommend using, 0xcaff/koel and binhex/arch-koel, however both are 2 years out of date and use hardcoded versions for Koel. The first image uses version 3.7.2, whereas the most recent as of Jan 2020 is v4.2.2.

It has a different interface than an alternative hosted on lsio already (Airsonic) and imo is also more responsive. It doesn’t have an app but rather works to make its web interface as responsive as possible on both desktop and mobile.

Koel is very nice. Would be cool to have a LSIO container.

About 8 years ago I developed a music streaming application (called ‘Treble’) because I didn’t like SubSonic and couldn’t find a good alternative. I found the need to setup Treble again to stream my music but found Koel. It’s very impressive. I’d love to see an LSIO container so the releases are up to date. It seems like the developer is actively working on it and has no interest in creating a docker image.

I really love to see koel running on my Raspberry Pi. I saw some activity over at the LinuxServer Github https://github.com/linuxserver/docker-koel hope to see a release soon