Linuxserver/mariadb does not work under armhf

i struggle with setting up mariadb on an odroid (armhf) device.

Following this Video at Youtube: Nextcloud, your personal cloud server, on Openmediavault

I installed linuxserver/mariadb
but that didn’t work

The “solution” which is pointed to everywhere is to remove linuxserver/mariadb
and to install lsioarmhf/mariadb instead.
Even here at the forum there is a thread pointing to this solution.

But the Problem to this is, that lsioarmhf/mariadb is allready outdated.
and at h t t p s : / / h ub.docker.com/r/lsioarmhf/mariadb it is said :
“THIS IMAGE IS DEPRECATED. PLEASE USE THE MULTI-ARCH IMAGES AT linuxserver/mariadb”

At the page of linuxserver/mariadb it is stated that:

But it does not work. I tried to “make it work” with only a small knowledge of docker and mariadb.
Is there a chance that somebody can point me to the correct steps to set this docker container up ?
(Perhaps the Youtube vid is just wrong ??)

Or is someone able to just to merge the two Containers.
e.g. “take the armhf stuff that makes this container work” from the “lsioarmhf/mariadb”-container
and “put it” in the “linuxserver/mariadb:armhf”-container to make it work.
Both are maintained by : sparklyballs

If someone is interrest in what i did to make the linuxserver/mariadb work in read on:

First Problem was (following the video) was that there was no “/sharedfolders/AppData/Nextclouddb/custom.cnf”
to edit.
So i went back to the OMV Docker webGUI , stopped the Container, and choose “modify”
For some reason the “Volumes and Bind mounts” were changed to some other values and were marked “readonly”
I redid the “Volume and Bind mounts” and had to uncheck the “readonly”-Box.

even with no pass didn’t worked.

I don’t know what “solution” you’re referring to, but that is not true.

lsioarmhf repo was entirely deprecated a long time ago as we now publish multi-arch images all in the linuxserver repos.

It sounds like you mounted the config folder in read only mode. You shouldn’t have. Config folder contains all settings and data for this app and the container must be able to write to it.

Read the description on docker hub or the github readme. It contains all the info you need to make this work. If you do follow a youtube video, you better follow it exactly.

If you create the container correctly, you shouldn’t need to fix permissions as it is done automatically.

Hello aptalca,
Thank you for your Reply.

I don’t know what “solution” you’re referring to, but that is not true.

Sorry for not beeing clear:
I refer to the Video-comments people having the same problems and to the Thread here in forum Linuxserver/mariadb - empty nextclouddb folder
Also it was likewise posted on the openmediavault forum.

Seems that all this comes from times when linuxserver/mariadb was without armhf support.

It sounds like you mounted the config folder in read only mode. You shouldn’t have.
Config folder contains all settings and data for this app and the container must
be able to write to it.

That was not exactly what happend. I set up the Container with this specs (look at 1 in the Screenshot) : 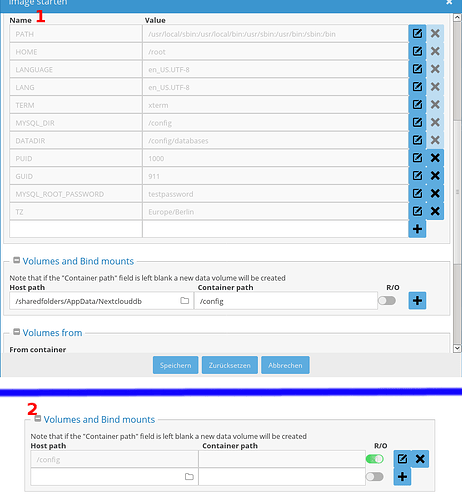 When checking the specs via the “Modify” option in Openmediavault docker webgui i found (look at 2 in the Screenshot above).

So i thought that this behavior was some kind “error management” of mariadb.

What helped me a bit with solving the issue was this:

If you create the container correctly, you shouldn’t need to fix permissions as it is done automatically.

They were set to: drwxr-sr-x

After a some testing i figured out that i had to

This did the trick partly. For some reason i had a strange behavior:

Anyhow, i just did “Modify” the container. To set the exactly same “Host path” again and saved.

Bingo ! Now at the second start everything is fine and running !

It seems you’re hitting an OMV issue where it is not saving your mount point correctly. In your #2 screenshot, it shows /config as the host path and blank for the container path. That’s an issue